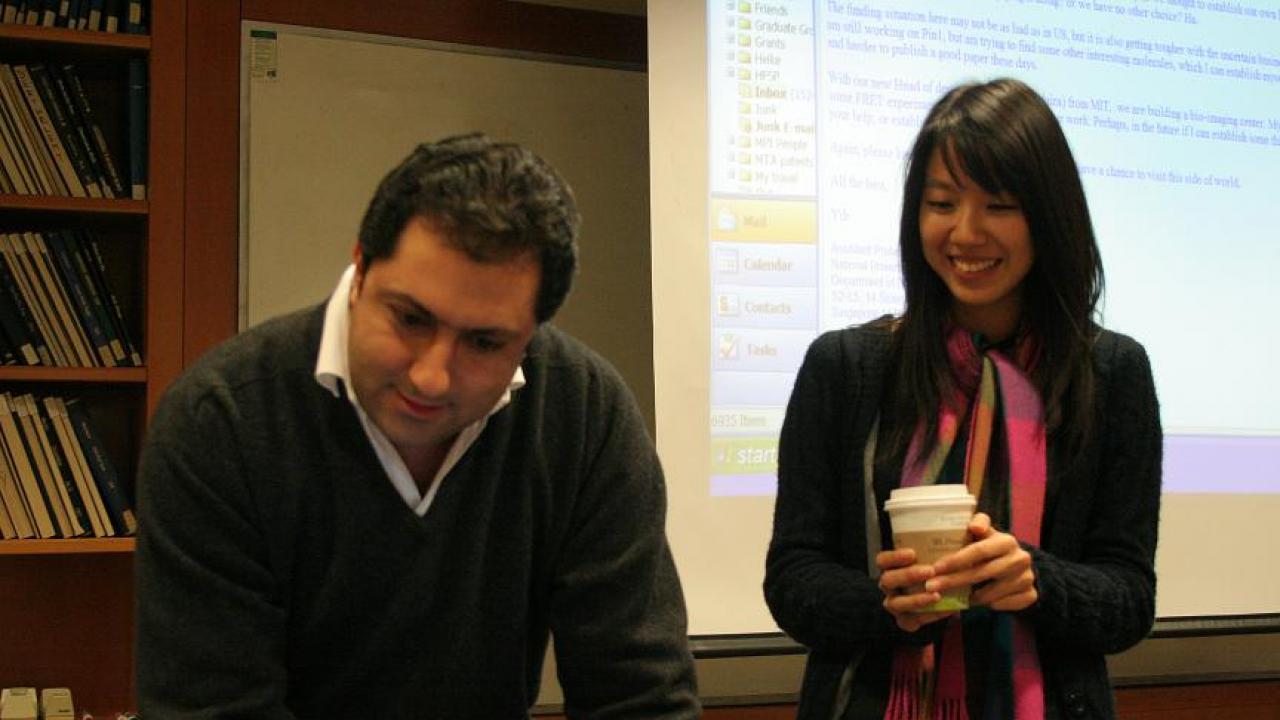 After receiving his doctorate from Oxford, Dr. Haj spent six years as a post doctorial fellow at Harvard. Dr. Haj brings a wealth of experience with him to UC Davis especially in the area of cell signaling, which is viewed as one of the essential components (along with system analysis/metabolomics) for understanding nutrition-related mechanisms in a 21st century context.

Dr. Haj is currently conducting research to understand the molecular signals responsible for metabolic diseases such as obesity and diabetes. He is particularly interested in protein-tyrosine phosphatases, or PTPs, enzymes which up- or down-regulate intracellular signals via dephosphorylation.

"For a long time, these enzymes were ignored," Dr. Haj says. "People had the misconception that phosphatases were boring."

Each phosphatase has numerous substrates. Studying such promiscuous enzymes, the thinking went, couldn´t possibly yield useful insight into metabolic regulation. But then, two independent labs generated knockout mice deficient in protein-tyrosine phosphatase 1B. Surprisingly, given that PTP1B has so many substrates, the two independently derived knockout strains shared the same phenotype of increased insulin sensitivity and resistance to diet-induced obesity. PTP1B thus appeared to have very specific intracellular targets. Additional work using knockout and RNAi approaches revealed the specificity of other phosphatases as well.

"This raised the hope that you could inhibit PTP1B in humans to increase insulin response and energy expenditure," says Dr. Haj. In 1999, he began exploring the workings of PTP1B as a postdoctoral scholar in the laboratory of Harvard´s Dr. Benjamin Neel. Now, as a recently appointed Assistant Professor of Nutrition, he´s bringing his research to UC Davis.

To understand how phosphatases can be inhibited, Dr. Haj needs to understand their actions both at the whole-body level and within each cell. "We´re using tissue-specific knockouts of PTPs to see what these enzymes do in a physiological setting," he says. His team will test the PTPs´ regulatory roles in peripheral insulin-responsive tissues. They´ve already demonstrated that the liver is a site of PTP1B action. Future work will let them see the level of communication and redundancy between tissues with respect to these enzymes.

In close collaboration with the laboratory of Dr. Philippe Bastiaens in Germany, Dr. Haj is using fluorescence resonance energy transfer (FRET) to examine PTP regulation inside each cell. This technique will help determine how enzymes with many substrates target their actions. "We know that localizing PTPs within the cell controls which substrates they can access," Dr. Haj says. PTP1B is tethered to the endoplasmic reticulum, where it must wait for substrates to come to it. This system of enzymatic regulation is rather like having sit-down service in a restaurant instead of a buffet. FRET will show what "meals" arrive at the enzyme and which "waiters" bring them.

Although Dr. Haj is very busy with his research, he enjoys exploring sit-down and buffet service in Davis at the macroscopic level. He grew up in Lebanon and has lived in the UK and Boston, so he eats "everything" – but sushi is his favorite.

Shortly after joining the UC Davis Nutrition Department Dr. Haj was selected to be a 2008-2009 Hellman Fellow, which involves an award of funds to support his research on the role of protein-tyrosine phosphatase 1B in diabetes. The Hellman Family Foundation established the UC Davis Hellman Fellowship program to provide support and encouragement for the research of promising faculty at the Assistant Professor rank who exhibit potential for great distinction in their research.