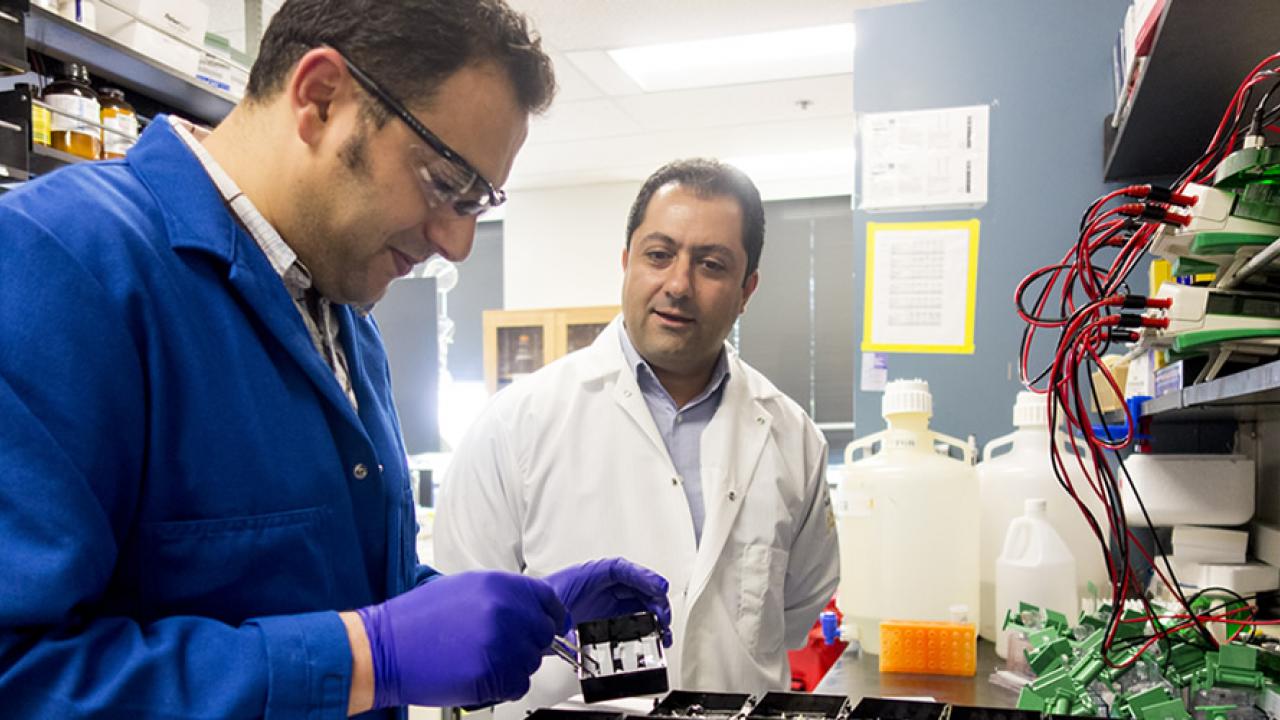 Drs. Haj and Bettaieb are among a group of scientsts at the University of California, Davis, who have identified a key mechanism in neuropathic pain. The discovery could eventually benefit millions of patients with chronic pain from trauma, diabetes, shingles, multiple sclerosis or other conditions that cause nerve damage.

A biological process called endoplasmic reticulum stress, or ER stress, is the significant driver of neuropathic pain, said lead researchers Bora Inceoglu of the UC Davis Department of Entomology and Nematology and UC Davis Comprehensive Cancer Center, and Ahmed Bettaieb, Department of Nutrition. The work is published July 6 in the journal Proceedings of the National Academy of Sciences.

“This is a fundamental discovery that opens new ways to control chronic pain,” said co-author Bruce Hammock, distinguished professor at the UC Davis Department of Entomology and Nematology and the UC Davis Comprehensive Cancer Center.

“We can now specifically search for agents to control ER stress and its downstream pathways,” Hammock said. “This search is already underway in a number of laboratories working on cancer and other diseases.”

Working with Professor Fawaz Haj of the UC Davis nutrition department, Bettaieb found that key molecular signatures associated with diabetes and diabetic pain were linked to ER stress. Neuropathic pain is a common consequence of both Type 1 and Type 2 diabetes, affecting up to 70 percent of patients.

Inceoglu, working in Hammock’s laboratory, showed that neuropathic pain could be initiated by compounds that cause ER stress and reversed by agents that block it.

The work sheds new light onto at least one biological process that mediates neuropathic pain, Inceoglu said. With this knowledge, researchers can now test ER-stress blocking drugs in the clinic, and carry out fundamental research on how different types of pain grouped under the name “neuropathic” differ from each other and respond to new drugs.

The study provides convincing evidence for a novel concept as to what causes neuropathic pain said John Imig, professor of pharmacology and toxicology at the Medical College of Wisconsin, Milwaukee, who was not involved in the study. The work provides new opportunities for drugs or drug combinations to treat chronic pain, he said.

Additional authors on the paper are Kin Sing Stephen Lee and Carlos Trindade da Silva, both at the UC Davis Department of Entomology and Nematology and the UC Davis Comprehensive Cancer Center.