Alcohol, also referred to as ethyl alcohol or ethanol, is a component of some foods and beverages produced by the fermentation of sugars by yeast. Alcohol is mainly consumed by drinking wine, beer and alcoholic spirits (1). Alcohol is widely consumed in the United States; the 2015 National Survey on Drug Use and Health found that 86.4% of people over the age of 18 had drank alcohol in their lifetimes and 56% reported that they had consumed alcohol in the past month. An estimated 88,000 deaths per year, including almost 10,000 alcohol-impaired driving fatalities, are a result of alcohol-related causes, making alcohol use the third leading preventable cause of death in the United States (2).

How is alcohol metabolized?

Alcohol is either absorbed quickly into the bloodstream (~20%) or absorbed at some point in the gastrointestinal tract; a small percentage is not metabolized and circulates through the body, ending up in the saliva, the breath, sweat and urine. Following absorption from the digestive tract, the liver metabolizes the alcohol using an alcohol-specific enzyme called alcohol dehydrogenase that converts alcohol into acetaldehyde. Acetaldehyde is then converted to acetic acid through further enzymatic activity (3). Reactions to alcohol vary widely and depend on several factors including race, sex, age, amount of alcohol consumed, use of drugs or prescriptions, family history, medical conditions, and how quickly the alcohol was consumed (1).

What is considered ‘one drink’ in the United States? 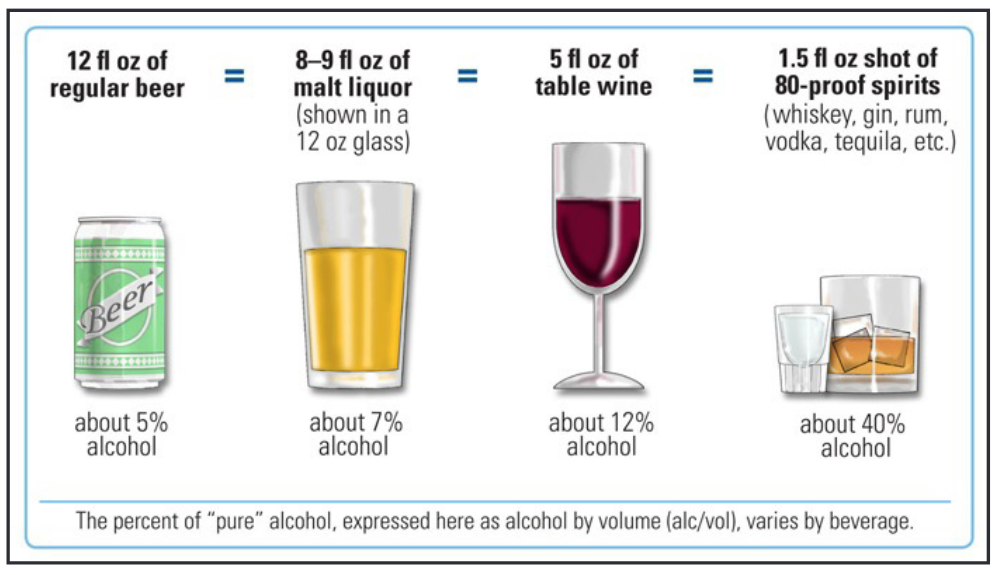 What are the recommendations regarding alcohol?

The Dietary Guidelines for Americans 2015-2020 does not recommend anyone who does not currently consume alcohol or drink to begin drinking for any reason, and beyond this, identifies groups of people that should not drink at all. Those who should completely abstain from drinking alcoholic beverages include (1,4):

Those under the age of 21 should not consume alcohol. Youth who consume alcohol before the age of 15 are six times more likely to become alcohol dependent than adults who begin drinking at the legal age (1). Other negative consequences of youth alcohol use include increased risk of fatal and nonfatal injuries, risky sexual behaviors, suicide, homicide, and poor school behavior (1).

Are there health benefits associated with alcohol consumption?

Some research has demonstrated that moderate consumption of alcohol may confer protective effects against coronary heart disease in healthy adults when compared to non-drinkers (4,5). Studies have shown that moderate consumption of red wine, in particular, may have health benefits to the consumer. This is due to the presence of resveratrol, a compound in grape skin, that can reduce symptoms of cardiovascular disease (6). Additionally, a review of 143 papers found that light to moderate alcohol consumption may reduce the risk of developing dementia and cognitive decline (7).

What are the negative implications of alcohol consumption?

While many Americans recognize that alcohol use can lead to motor-vehicle accidents and dependence, it should be recognized that alcohol consumption can be harmful to overall health for many reasons (4).

What is binge drinking?

According to the National Institute on Alcohol Abuse and Alcoholism, binge drinking is a pattern of alcohol consumption that brings the blood alcohol concentration level to 0.08% or higher; this equates to, in ~2 hours, consuming approximately 5 or more drinks for men or 4 or more drinks for women. Binge drinking usually results in “getting drunk”, or acute intoxication (1). The 2015 National Survey on Drug Use and Health reported that 26.9% of people aged 18 years or older engaged in binge drinking in the past month (2).

What are the signs, symptoms and implications of alcoholism?

Alcoholism is a chronic disease, now referred to as severe alcohol use disorder. While there are many signs and symptoms, some include: inability to limit drinking, continuing to drink despite personal and professional problems, the need to drink more for the same effect, and the inability to focus on other tasks due to the desire for a drink (1). If a drinking problem is suspected, a healthcare provider should be consulted. The National Drug and Alcohol Treatment Referral Routing Service can also provide information for treatment centers in a community and equip professionals and consumers to effectively communicate about alcohol problems. The NDATRRS can be reached at 1-800-662-HELP. (1)

University policy also prohibits reprisal or retaliation against any person in any of its programs or activities for making a complaint of discrimination or sexual harassment or for using or participating in the investigation or resolution process of any such complaint. University policy is intended to be consistent with the provisions of applicable State and Federal laws.

Copyright © The Regents of the University of California, Davis campus, 2018. All rights reserved. Inquiries regarding this publication may be directed to cns@ucdavis.edu. The information provided in this publication is intended for general consumer understanding, and is not intended to be used for medical diagnosis or treatment, or to substitute for professional medical advice.