Fats are a subset of a class of nutrients called lipids, which also include phospholipids and sterols. Usually when people refer to fats and oils, they are speaking of triglycerides, the most common forms of fat in the diet. Triglycerides come in many sizes and several varieties, but they all share a common structure: a backbone of glycerol to which three fatty acids are attached. While all glycerol molecules are alike, the fatty acids may vary in two ways: length and degree of saturation.

What are fatty acids?

Monounsaturated fatty acids have one double bond in their structure. These can be found in plant sources such as nuts and vegetable oils like olive, canola, and sunflower oils. They are liquid at room temperature (1). 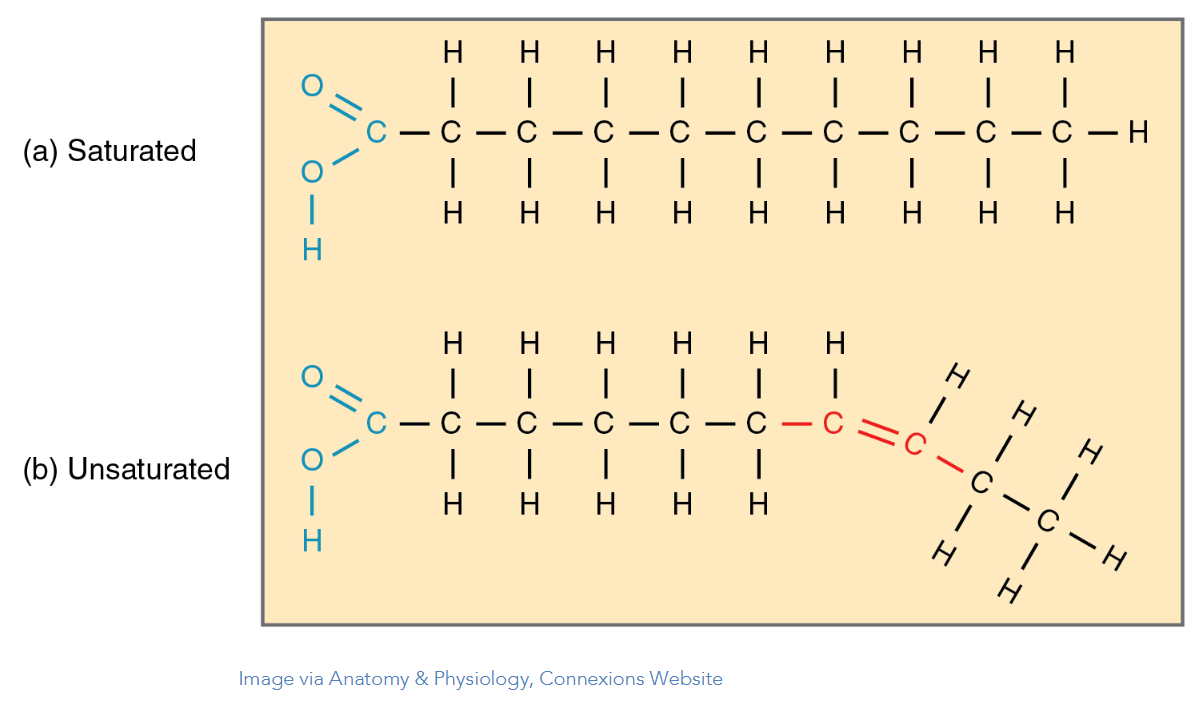 What are trans fatty acids?

Trans fatty acids are the product of hydrogenating oils, a process that converts liquid fat to solid fat. This method has been used by many food manufacturers because it extends the shelf life of foods, increases resistance to rancidity, and is fairly inexpensive. Trans fatty acids also occur naturally in some animal products (1).

Studies have found that trans fats raise low density lipoprotein cholesterol (LDL-C) and total cholesterol and suggest a correlation between cardiovascular disease and trans fat intake (1). Due to concern about this correlation, the Food and Drug Administration (FDA) requires information about the trans fat content of foods on nutrition food labels. Since the effective date of this requirement, January 1, 2006, average consumption of industrially-produced trans fat has significantly decreased from 3 to about 0.6 percent of total calorie intake in the United States (3).

What functions do fats serve?

Triglycerides are mainly responsible for storing energy and insulating the body and organs. They also transport vitamins that are fat-soluble and contribute to taste and feeling full after eating a meal (4).

How much fat should be included in your diet?

The 2015-2020 Dietary Guidelines for Americans recommends limiting total fat to 20 to 35 percent of total daily calories and saturated fat to no more than 10 percent of total daily calories (1,2). According to the most recent report from the Institute of Medicine’s Food and Nutrition Board on Acceptable Macronutrient Distribution Range for Fat, the suggested goal is to maintain a total dietary fat intake of 20 to 35 percent for adults, 30 to 40 percent for children ages 1 to 3, and 25 to 35 percent for children ages 4 to 18 (5).

When does too much fat become a problem?

A substantial rise in the prevalence of obesity among children and adults in the United States has been observed (6). National statistics show that approximately 30 percent of children and adolescents and over 68 percent of adults are considered overweight or obese (6). This trend contributes to the population being at greater risk of developing chronic conditions such as type II diabetes and cardiovascular disease (1). Factors contributing to obesity are large portion sizes, low intakes of nutrient-dense foods, and inadequate exercise (1). Furthermore some nutrients, such as saturated fat, are a concern for overconsumption (1).

What is the relation between fat and cardiovascular disease?

Cardiovascular disease (CVD) is a public health concern because an estimated 83.6 million, or 1 in 3, Americans have at least one type of CVD (7). Risk factors for CVD include inactivity, high serum triglycerides and cholesterol, and overweight and obesity (8). While some fat is essential in our diet, it is recommended to monitor fat consumption (1). On average, about 36 percent of daily calories comes from total fat and almost 12 percent from saturated fat in American diets (1,9). Although saturated fat consumption has shown no significant association with incidence of CVD, replacing saturated fat with unsaturated fat, particularly polyunsaturated fat, has been associated with reduced risk by lowering triglycerides, total cholesterol, and LDL-C in the blood (7,8). A low cholesterol diet was previously believed to lower serum cholesterol, however studies have found no relationship between consumption of dietary cholesterol and levels of serum cholesterol (1,8).

Dietary patterns that have shown positive results in reducing risk of CVD are rich in vegetables, fruit, whole grains, low- and non-fat dairy, and seafood, low in red/processed meats, and include regular intake of nuts and legumes (8). Avoiding partially hydrogenated oils containing trans fat is also recommended (1). This diet can be achieved and tailored to individual needs through multiple dietary patterns (1).

What is the relation between fat and cancer?

There is some evidence that diets higher in vegetables, fruit, whole grains, lean meats, and seafood, and lower in red/processed meats and saturated fatty acids are associated with a lower risk of certain cancers, especially colorectal and breast (1). However, the National Cancer Institute does not support any diet for prevention of breast, colorectal, lung, or prostate cancers (10-13). Studies are currently being conducted to determine if different diet modifications can help prevent certain cancers (10-13). There is some emerging research of medium chain fatty acids inhibiting growth of certain human cancer cells (14). However, studies have only been conducted in vitro so conclusions on potential effective in vivo cannot be drawn until further research is conducted (14). Thus, the best advice is maintaining a healthy body weight and getting regular physical activity (1).

The preparation of food is also of importance. Deep-frying foods or charbroiling them until they have a burned surface may pose a risk to the consumer since this process results in development of potential carcinogens through fat oxidization (15).

What is the relation between fat and mental health?

Studies for dietary patterns to aid in mental health disorders are very recent and still developing evidence (1). Omega-3 fatty acids DHA and EPA are the most studied in relation to neural health (1). Some studies have found DHA to aid in neural signaling speed and EPA to have antidepressive properties when used in combination with other treatments (1,16). Due to enough strong evidence of favorable results, the American Psychological Association uses supplementation with DHA and EPA for major depressive disorders (16).

How is fat intake calculated?

You can determine the number of grams of fat that provide 30 percent of calories in the daily diet as follows:

What are some ways to control fat intake?

The 2015-2020 Dietary Guidelines for Americans recommends taking a food-based, total diet approach to meet recommendations (1,2). There are several strategies to help reduce fat consumption including smaller portions and recipe modifications (1).

Here are a few simple dietary suggestions to accomplish this goal:

Diets very low in fat are generally not recommended because fat is often replaced with refined carbohydrates which has generally been associated with dyslipidemia through hypertriglyceridemia and low high density lipoprotein cholesterol (HDL-C) concentrations (1,8). Dietary fat consumption should be balanced instead of reducing total fat (1).

What are some food sources for different kinds of fats?

What is the total fat, saturated fat, and unsaturated fat content of some common foods? (17)

The University of California prohibits discrimination or harassment of any person on the basis of race, color, national origin, religion, sex, gender identity, pregnancy (including childbirth, and medical conditions related to pregnancy or childbirth), physical or mental  disability, medical condition (cancer-related or genetic characteristics), ancestry, marital status, age, sexual orientation, citizenship, or  service in the uniformed services (as defined by the Uniformed Services Employment and Reemployment Rights Act of 1994: service  in the uniformed services includes membership, application for membership, performance of service, application for service, or  obligation for service in the uniformed services) in any of its programs or activities.

University policy also prohibits reprisal or retaliation against any person in any of its programs or activities for making a complaint of  discrimination or sexual harassment or for using or participating in the investigation or resolution process of any such complaint. University policy is intended to be consistent with the provisions of applicable State and Federal laws.

Copyright © The Regents of the University of California, Davis campus, 2018. All rights reserved. Inquiries regarding this publication may be directed to cns@ucdavis.edu. The information provided in this publication is intended for general consumer understanding, and is not intended to be used for medical diagnosis or treatment, or to substitute for professional medical advice.